Anemia (in the old days it was called anemia) — it is not just a «languid» pale and lowered hemoglobin. Anemia: quiet and insidious. This disease is associated with a decrease in the number of erythrocytes (red blood cells) in the blood, causing the whole body suffers, as all the organs begin to experience a lack of necessary materials.

At first, anemia does not manifest itself, except that some are marked weakness and fatigue, but then the process goes very quickly — so that further treatment may become useless.

Previously, anemia does not respond to treatment, so called — malignant. Fortunately, anemia is treated elementary when to see a doctor in time. But the fact remains that even in large cities with a powerful diagnostic base people prefer to pull until recently, while their ailments do not become unbearable and they are not sent to the intensive care unit.

The Many Faces of the illness.

There are several types of anemia. The most common have iron deficiency anemia (IDA) and anemia with vitamin B12 deficiency. Major risk factors for the development of anemia, in addition to malnutrition, — periods of intensive growth in children and adolescents, a large blood loss (for regular heavy menstrual period, childbirth, all operations), menopause, and pregnancy. During these periods of time the human body needs iron povyshenno.

If the expectant mother suffering from anemia, the newborn also has the disadvantage of hemoglobin in the blood — which, of course, affects negatively on their health and overall development.

In nurturing a child’s parent body spends a total of about 600 mg of iron. And if a woman gives birth to a second, third, and with a few interruptions, the iron reserves are almost exhausted, because they are not limitless.

How to detect early anemia?

In anemia with B12 deficiency, which is particularly «fond» of «pure» vegetarians, people look too good: it is pale jaundiced, he has a sense of constant cold, especially in the fingers (in addition, they begin to tremble), begin muscle pain, cramps, disturbed sense of smell and taste, the feeling scalded tongue (permanently).

Moreover, such an anemia is usually associated with reduced susceptibility and immunity to colds and gastritis. Then, if nothing is done, begin memory lapses, and then complete her loss, disorientation in space, paresis and paralysis, muscle atrophy and complete.

Stuck in traffic, they breathe in exhaust fumes and felt weakness, dizziness, and skin had an unhealthy jaundiced. These are manifestations of hemolytic anemia, fortunately, time.
Still, the most common anemia associated with iron deficiency.

If the losses begin to dominate over iron intake, the level of hemoglobin in the blood falls below 120 mg / l — the minimum extent necessary for the health, and the red blood cells themselves become less than
required lower limit of normal:
4h1012 1 l in men and women 3h1012.

It affects the organs and tissues, lacking oxygen, and their work is disrupted.
Meanwhile, to detect a deficiency of this important macro element pass fairly general analysis of blood from a finger. But even a satisfactory result can not guarantee that you do not have a hidden iron deficiency, in which the analysis seems to be normal, and signs of anemia are already evident.
If you leave the problem unattended, it will soon declare itself.

If you find these symptoms you or your loved ones (especially the elderly), do not pull from the survey, and immediately contact the district physician to take the necessary tests. They may be required to get an appointment and then to a hematologist who diagnosed clarify appointing additional tests to rule out, for example, leukemia (in fact launched anemia, and cancer of the blood do not differ on the «normal» analysis). A reception at the professional recording will have to wait one to three months, while the bill has already gone for weeks and sometimes days.

Being healthy is simple!

As a preventive measure not forget to regularly eat foods rich in iron and vitamin B12, and vitamin C, which is essential for the absorption of iron. The latter are especially numerous in garnets, apples, buckwheat, beef and pork liver, parsley, dill, celery, mushrooms, peas, beans, spinach, sorrel, green leaf lettuce.

Vitamin B12 is found in meats, particularly in the kidneys, milk products. Vitamin C in many citrus fruits, sweet peppers, cranberries, lingonberries, cabbage.

To make a dangerous shortage of valuable mineral, the doctor will prescribe a medicine containing it, as well as additional drugs that enhance iron absorption. Because iron is best absorbed in an acidic medium, wash down with iron complexes sour juice (grapefruit, orange, lemon, pomegranate, apple), a decoction of rose hips, cranberry juice and had an alkaline mineral water and milk.

By the way, if you drink milk buckwheat and cook over It oatmeal, useful iron from these meals will not pass into the blood. The same effect is given eggs and strong tea — tannin, included in its composition, it inhibits the absorption of much-needed element to you.

Men fared better than women. On average, they lose only 1 mg of iron per day, so rarely collide with anemia, but it is not and bypasses.
Heavy physical activity, injury, illness, stress, overwork lead to overspending and iron cause anemia even in the stronger sex.

If you are too passionate about meat products and sweets and not paying sufficient attention to vegetables, can fall victim to folic acid deficiency anemia folic acid. It is contained in the green, green leaves of young cabbage and other plants. Meanwhile, to avoid such a anemia:
you need to eat a bit of everything.

Symptoms of iron deficiency can be: pallor, fatigue, frequent headaches. Children sharply lower performance, they do not remember the material, become nervous and moody. Adults also become irritable. In addition, IDA is characterized by palpitation, flashing «flies» in front of his eyes.
Then there are piercing and cutting pain in the heart.

You bit off apple — and after a while it grew dark, as if was covered in rust. This means that it contained a so-called Dibasic connected to two oxygen atoms in the oxidized iron passed (tribasic) form. And so it is much better to digest!

To enable this process, Bulgarian naturopaths suggest squeeze apple juice and leave it in a wide glass for 2-3 hours, until it darkens. Or evening fork to pierce the apple in many places and eat it for breakfast. Alternatively, you can prepare a puree of fresh grated apples.

Take the test for anemia. 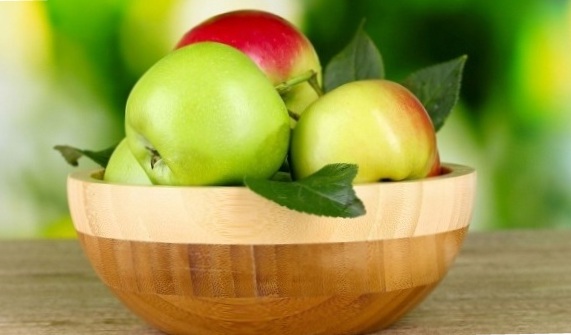