Compresses for varicose veins. Applying the compresses recommended by traditional medicine is one of the most important home-based methods for controlling varicose veins. Sessions are carried out before the onset of relief of the disease.

1. Apply half a green tomato to diseased veins. Wrap an elastic bandage on top and leave it overnight. Take off in the morning. Compress helps reduce venous cones. Therapy is recommended to continue for a whole year.

2. Use tincture of datura seeds (100 grams per 500 ml of vodka). In half a glass of water, 20 drops are diluted. Soaked in liquid, cotton wool is applied to the affected area, covering with polyethylene from above. An elastic bandage is shown to hold the compress.
Datura tincture is able to have a negative effect on the body even in case of external use. If a feeling of «intoxication» occurs, the procedure must be stopped immediately.

3. Reticular varicose veins treated with apple cider vinegar. Gauze dressings moistened in it are applied to the affected surface, leaving for two hours. Therapy is repeated twice a day. Apple cider vinegar can also be used against cellulite with varicose veins. In this case, it is used for wrapping, mixing with water in a ratio of 1: 5.

4. Varicose veins of deep veins and testicles are treated as follows: flowers and leaves of silver wormwood are ground in a mortar, a tablespoon is taken and combined with 20 ml of sour milk. Apply the finished product to gauze and apply to the veins. A cloth is applied over the compress. After 2 hours, the body is washed with water. The treatment takes five days. If necessary, repeat the course.

5. For the treatment of trophic ulcers, a slurry of fresh potatoes is used. Impose for five hours. Repeat twice a day. Potato wraps are indicated for cellulite for varicose veins. In this case, the potato gruel is applied to problem areas and wrapped with cling film.

6. Cabbage leaf helps in relieving pain. They beat it off a bit to let the juice flow, and with a bandage, fix it on the sore spot. Change the bandage after three hours, if necessary, repeating several times a day.

7. In a glass of boiling water, a handful of hop cones are steamed. After they put cones on the sore spots, fixing with a gauze bandage.

8. Cut off several sheets of Kalanchoe. Five days are kept in the freezer, after which they are scrolled in a meat grinder and mixed with vodka at the rate of 1: 2. They stand in a dark place for a week. After filtration, they are used for compresses, moistening a gauze bandage in the composition and applying to the affected skin surface for 1 hour. If necessary, repeat two to three times a day.

9. For the treatment of skin over diseased veins, tincture of white acacia flowers and birch buds is used (raw material is taken in an amount of 2: 3). Aged for a week. After that, cotton swabs are moistened in the resulting product and applied to the skin for five to ten minutes once a day.

10. Walnut kernels are crushed into small crumbs. At the rate of one to two, pour olive oil and store for forty days in a place hidden from sunlight. In strained composition, gauze is moistened, which is then applied to diseased veins for 1 hour.

11. At the rate of 1: 2 mix garlic (used with white husk) and vegetable oil. The resulting mass is applied to diseased veins, overlying a thin layer of gauze. To fix the compress, take an elastic bandage. Leave a compress overnight. In the morning, the skin is washed with running water. Wear compression socks.

12. With varicose veins under the knee, compresses are made from whey at night. Cotton wool is moistened in it, applied to a sore spot and wrapped with cellophane on top. In the morning, the skin is washed with cool liquid. The recipe can be used by pregnant women who feel heaviness in their legs.

13. Ten days perform compresses from the crushed lung of a pig. For the best therapeutic effect, lobules of the lung are sprinkled with sulfur. The bandage is left until the morning.

14. Prepare a decoction of sow thistle (200 ml of water accounts for a large spoonful of raw materials). Together with the grass is applied to the affected areas, leaving a maximum of three hours.

16. Prepare a collection of equal amounts of sage leaves, primrose and watch green leaves, cuff leaves, Icelandic moss, St. John’s wort grass, meadowsweet, a string of rose petals, wormwood, white willow bark, horse chestnut flowers. 10 grams are taken, combined with a glass of boiling water and kept for a couple of hours. Gauze soaked in the composition is applied to the sore spot for six hours. 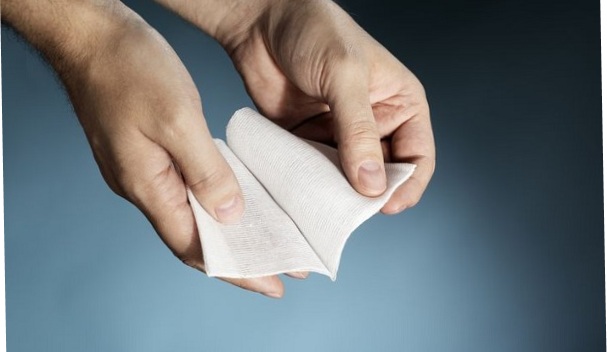