In both licorice and marshmallow, the highest concentration of biologically active substances is found in the root. The healing properties of this vegetative organ of both plants are of great value in the treatment of infectious and inflammatory diseases of the respiratory system, accompanied by a cough.

Licorice contains saponins: this substance irritates the mucous membrane of the lungs, stimulating the secretion of the epithelium and improving the secretion. At the same time, licorice (another name for licorice) makes the phlegm less viscous, so it is easier and faster to excrete. In addition, licorice relieves inflammation and has a tonic effect.

Marshmallow also has mucolytic properties — it liquefies phlegm and accelerates its excretion from the lungs. Also, the plant has an enveloping effect — this is the result of the influence of mucus, which protects the mucous membranes from harmful factors. And the combination of mucus with polysaccharides absorbs substances that are secreted by inflamed epithelial cells.

Marshmallow and licorice are safe and non-toxic herbal remedies. And although they have a fairly high medical efficiency, they have a small list of contraindications. The infusion according to this recipe must be carefully consumed by allergy sufferers and diabetics. The remedy is contraindicated for:

pregnancy and breastfeeding;
chronic hypertension;
severe kidney and liver diseases;
heart failure.
Marshmallow and licorice are also allowed for children, but only as prescribed by a pediatrician.

Mix the raw materials needed to prepare the infusion.
Take 1 tbsp. l. the resulting mixture and pour into a container with a volume of at least 600 ml.

Pour the vegetable collection with two glasses of boiling water — 400-500 ml.
Leave the product to infuse at room temperature for at least an hour.

When coughing, such an infusion of licorice root and marshmallow is consumed throughout the day. Reception is divided by 4-5 times. The infusion should be drunk warm. 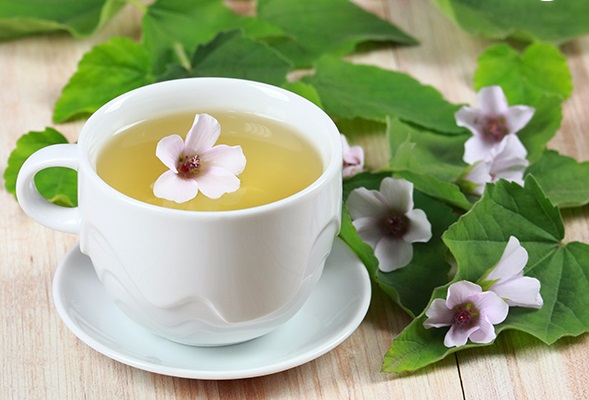