Mulberry berries are useful in childhood and adult anemia. With their help, it is possible to overcome the signs of pathology without drugs. Fresh fruits are squeezed under a press at home. The resulting juice is sent to the fire. Evaporate until a syrupy mass is formed. Use a folk remedy for 1 tbsp. l twice a day. Store in the refrigerator.

Acorns are peeled and ground. In proportion to one to two combine with water. Boil until gruel. It is dried and roasted, and then sent for grinding in a coffee grinder. Ready coffee is used as follows: 1 tbsp. l pour a glass of milk and cook for five minutes over low heat. Add some granulated sugar. The manipulations are repeated three times a day.
Acorns contain quercetin, a toxic substance that poses a health hazard.

For elderly people with anemia, it is useful to use a glass of kefir in which a spoon of honey is dissolved. You can repeat the treatment three times a day.

In equal weight they take pitted prunes, raisins, dried apricots, rose hips and figs. The same amount is mixed with water and allowed to stand overnight. In the morning pass through a meat grinder. Everything is well mixed, put in a glass container with a lid and sent to the refrigerator. Used for anemia in children and adults, a large spoon four times a day. There is a slightly modified composition of the paste: walnut, dried apricots, raisins and honey. The components are crushed, mixed and consumed in three spoons per day.
There is another recipe that involves mixing chopped walnuts and raw buckwheat (cup per cup). A similar amount of honey is added to the mass. Use a large spoon per day.

In the absence of heart problems, such anemia treatment is recommended: a mixture of several drops of thyme, lemon and geranium oil taken in a hot water bath is added. The procedure takes twenty minutes. Repeat every other day.
The same oil mixture can be used for inhalation (drip onto a clean cotton cloth and inhale for several minutes).

With the development of anemia in children, it is useful to prepare a drink from honey and milk (a spoon on a cup). No less effective is honey added to any morning cereal.

With a lack of hemoglobin in the blood, a mummy is recommended. Five grams of the substance is dissolved in 500 ml of water and taken according to the scheme:

A severe degree of anemia involves taking 0.3 g per glass of warm water in the mornings and evenings. Treatment is continued for at least ten days. After a five-day break, you can resume.

For anemia, it is good to eat grated radish. Repeat up to six times a day, washed down with clean water. At the same time, it is recommended to take mustard seeds — up to thirty per day. The course of treatment lasts about a month.
Iron is found in pumpkin, potato, rutabaga, onion. They are also recommended to be consumed as often as possible. Leaf lettuce is very useful for people with anemia.
The absorption of iron is facilitated by ascorbic acid. Contained in peach, pear, melon, corn. It is equally useful to treat yourself to watermelons.
It is good to eat carrots with sour cream or vegetable oil, especially for breakfast. It can be included in salads, mixing with chopped beets, radishes.

Dry chopped fig fruits in the amount of one kilogram are poured with a liter of Cahors, mixed with a liter of wine vinegar. Day defend, then bring to a boil and cook under the lid for half an hour. The filtered chilled composition is used as poultices on the spleen region with a hemolytic type of pathology. Store in the refrigerator.
Oatmeal compresses are no less effective. They are held for an hour in the morning and in the evening.
Alternative medicine practitioners know another recipe for spleen repair. Take root black radish, cut off the top and make a hole. Shredded horseradish is placed there and poured with fresh honey. Cover with the top and place in the oven for baking. The portion is designed for several days: in the morning they consume several tbsp. l., for lunch and dinner — one at a time. Treatment is performed for about ten days.

For any kind of anemia, it is recommended to eat half a teaspoon of propolis daily, preferably before meals.

With anemia, it is recommended to use butter every day, in which propolis is added (100 grams no more than a dessert spoon).

Use two to four dessert spoons daily before and after meals.

Strawberries, currants, mountain ash, honeysuckle and other berries, according to adherents of alternative treatment, should be included in the diet of everyone who suffers from anemia. Children are no exception. 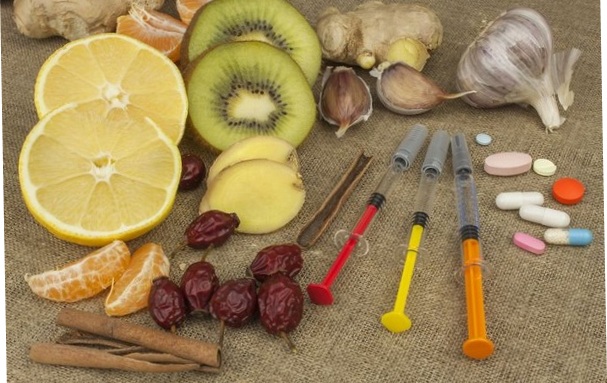