Esophagitis is called inflammation of the mucous membrane of the esophagus, accompanied by heartburn, pain at the time of swallowing and nausea. Forms of the disease vary in the nature of the inflammatory process. Esophagitis is polyetiological, that is, it can be a consequence of many factors. The most likely is the reflux of the acidic contents of the stomach into the esophagus. A dangerous consequence of inaction is Barrett’s disease (precancerous condition).

Subacute and chronic esophagitis is indicated for treatment at home. Along with the diet, it is recommended to take medicinal plants that have anti-inflammatory and antispasmodic effects.

In acute inflammation of the esophagus and the catarrhal form of the disease, treatment with microclysters can be supplemented using an infusion of the following components (in equal amounts):

5 grams of collection pour 80 ml of boiling water, incubated for an hour. After filtering and injected into the anus, pre-lubricated with cream. The procedure should be performed daily at night for a week.

1. Infusion of caraway seeds is used to reduce pain in erosive and other forms of the disease. Dry raw materials in the amount of a dessert spoon are poured with boiling water (250 ml). After a quarter of an hour, it is filtered and taken (duration is not limited). For a day you need to drink three servings. Before each meal, a new drink is prepared.

3. Infusion of the altai root. Pour fifteen grams of raw material with boiling water (300 ml), insist for at least 25 minutes. After straining, the medicine is considered ready for use. Take 25 ml no more than five times a day before meals. The course continues until the unpleasant symptoms are eliminated. In chronic esophagitis, the drink is indicated during exacerbations.

4. The rich composition of flaxseed helps in removing toxins from the body, envelops the intestinal and stomach mucosa, and regenerates damaged tissues. The recipe for eliminating the symptoms of inflammation is as follows: add 15 teaspoons of flaxseed to a teaspoon of chamomile, thyme, tansy, bearberry, coriander and baby. 4 tablespoons of the collection is poured into a half-liter jar and poured with hot water. Let it brew for a couple of hours. They drink the medicine three times a day, 70 milliliters each. Duration is approximately two months.
Flax seeds are strictly contraindicated in diseases of the gallbladder, pancreatitis and hepatitis.

5. To enhance the immune system, which suffers from an erosive form of the disease, the following recipe is shown at home: 100 g of dry thyme is poured with a liter of dry white wine. Insist a week, occasionally shaking. After tincture is sent to a slow fire and brought to a boil. Allow to brew for 7 hours. The finished product is taken 50 ml three times a day.

6. The infusion is especially effective for manifestations of hemorrhagic esophagitis. Mix two parts of walnut leaves, lemon balm and a pulp, add three parts of rhizomes of incense, four parts of knotweed and plantain leaves. Pour phyto-collection of 400 ml of boiling water. Leave to insist on the night. In the morning, filter the infusion. Drink 60 ml three times a day before breakfast, lunch and dinner for at least three weeks. The maximum course duration is 5 weeks.

7. Thirty grams of crushed ginseng root pour 0.5 liters of vodka, leave for a month in a dry, dark place. Shake daily. After filtering, place the infusion in a glass opaque container with a lid. Consume 20 drops several times a day before meals. The course of treatment lasts about 45 days. The recipe is especially suitable for treating an erosive form of the disease.

8. Chopped rose hips pour 200 ml of well warm water, stand the night. The next morning, strain. Drink four times 50 milliliters, maintaining a half-hour interval before a meal. The course is a month.
In the wild rose, a high content of ascorbic acid is noted, which has an adverse effect on people with stomach diseases. Official medicine recommends special vigilance to those who suffer from ulcers or gastritis. 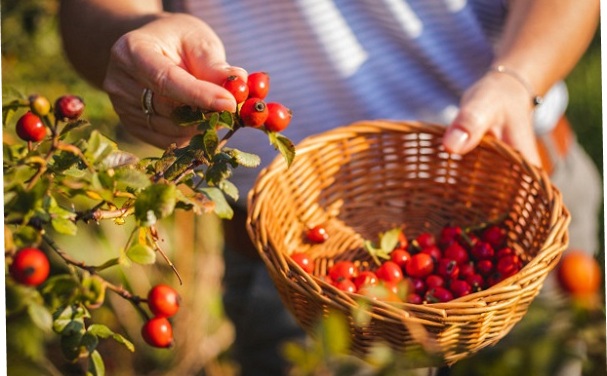