Home treatment through lotions helps to get rid of pain and other signs of the disease. Recommended method for children and adults. Procedures are carried out until the clinical picture disappears.

1. In the treatment of otitis externa, an alcoholic solution of brilliant green greens is used, which has a disinfecting and warming effect. In the «green» moisten a cotton swab, scroll in the ear canal and remove it. A sign of the effectiveness of the procedure is a feeling of warmth at the beginning of the session and itching after a couple of hours. To achieve the result, it is recommended to perform no more than five procedures.

2. In a proportion of one to one mix alcohol tincture of propolis and natural honey. Lightly heated in a steam bath. Wet with a cotton swab. Scroll in the inflamed ear, repeating three times a day. An especially effective prescription is considered if purulent otitis is treated.

3. To a glass of hot liquid add a large spoonful of dried raw pharmaceutical chamomile. After half an hour, the resulting infusion is poured and a cotton swab is soaked in it. They are placed in the ear and slightly pressed so that a little infusion gets into the focus of inflammation. Thus, any type of otitis media is treated, including acute and purulent.

4. On high heat bring a cup of village milk to a boil. A couple drops of hemp oil are introduced. The composition is moistened with a cotton pad, scrolled in the ear and removed. Manipulations are performed three times a day. The recommendation allows you to quickly overcome the acute inflammatory process, accompanied by severe pain.

5. Wet a cotton swirl twisted into a tube in warm urine. Insert into the ear and crank, slightly pressing. Repeat about three to four times a day. Effectively with otitis media in children and adults.

6. Prepare garlic oil. Two heads of garlic are finely chopped, spread in a glass and olive oil is poured to the top. Cover and incubated for ten days in sunlight. Stir the mixture three times a day. On the eleventh day, filter, enter half a dessert spoon of eucalyptus oil. Pour into a container of dark glass. Store the product in the refrigerator. Used for lotions twice a day, wetting cotton wool in oil and sending to the ear canal. Press lightly on the turunda and take it out.

7. If it is necessary to cure the fungal type of the disease, apple cider vinegar and water are mixed evenly. A cotton swab is soaked in the composition, which is then placed in the ear for two to three minutes. Then the swab is removed and laid on the opposite side, allowing excess fluid to leak.

8. Two large spoons of crushed roots of horse sorrel are poured with two circles of water and brought to a boil. Boil until the volume decreases several times. Filter. A cotton pad folded in a tube is moistened in a medium. They are placed in the ear canal and pressed to make the glass liquid. After the cotton swab is removed. Manipulations are carried out several times a day.

1. Coriander fruits, St. John’s wort and mint grass, lingonberry and birch leaves are still mixed. In a mug of water, boil a tablespoon of the collection for half an hour. Filter, divide into two parts and drink for a day. Helps with purulent disease, treats acute pain.

2. In equal shares combine the roots of burdock, nettle and clover grass, knotweed, mint, horsetail, eucalyptus leaves and celandine. Chopped. In half a liter of liquid, two tablespoons of the raw material are boiled for five minutes after boiling. Defend six hours and wring out. Take three times a day for a glass.

3. In equal amounts mix the root of the serpentine mountaineer, the leaves of the birch hanging, angelica root, calendula, dandelion roots, tricolor violet grass, mint, plantain leaves, motherwort and lavender. A handful of raw materials is taken and half a liter of water is poured. Bring to a boil over low heat, leave at room temperature for three hours. Use for chronic inflammation of two glasses three times.

4. Birch leaves, shoots of rosemary, grass motherwort, greens of three-colored violets and yarrow are mixed in equal proportions, then chopped and selected a couple of large spoons. Add to 700 ml of water and simmer for five minutes over low heat. Drink three times a day in a glass. 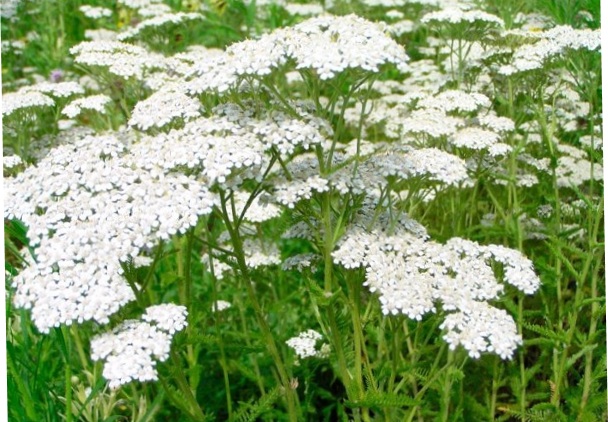