An ulcer is an inflamed wound formed on the surface of the skin or mucous membrane. If measures are not taken in time, further tissue destruction can occur. More often than others, a duodenal ulcer, stomach, and esophagus are diagnosed. An ulcer can also form on the legs, in the mouth, on the lip, on the mucous membrane of the cervix and the cornea of ​​the eye.

The method is intended for the treatment of ulcers in the oral cavity, on the lips and on the legs. The number of procedures per day varies from two to five. Therapy through applications is recommended to be performed before recovery.

1. Half the cup is filled with milk, in which the raw yolk of the chicken egg and a small spoon of honey are dissolved. A finger wrapped in a sterile bandage is moistened in the composition and the lesion sites are treated with the disease. Thus, it is good to treat sores on the tongue and gum.

2. Grind the almond kernels (on a grater, blender or under pressure). The resulting chips are combined with honey until a creamy mass is obtained. Use a composition for the treatment of sores on the tongue, gum and lip.

3. In equal proportions mix warm boiled water and a 3% solution of hydrogen peroxide. Wet a cotton swab and treat sores on the lip.

4. Squeeze the juice from a quarter of a lemon. They treat wounds on the tongue and gum as often as possible.

5. Squeeze the juice from half the lemon. Introduce ¼ dessert spoon of soda, a teaspoon of cold moisture and half a dessert spoon of honey. Stirring until smooth, is used to treat wounds in the mouth.
During the procedure, burning and tingling sensations may be felt.

6. Cut a fresh leaf of aloe or Kalanchoe. Apply to wounds on the lip or in the oral cavity.

7. A little sea buckthorn or rose hip oil is applied to the cotton pad. You can also choose propolis oil solution. They treat lesions on the lip or in the mouth.

8. Cotton wool is dipped in honey. Pass through the lesions in the oral cavity as often as possible. It is possible to instill honey in the eyes if there is a corneal ulcer — a couple of drops twice a day.

9. A few cloves of garlic are passed through a special chopping device. Knead a spoonful of kefir. They treat mouth ulcers at least three times a day.
The recipe may cause a burning sensation.

10. An effective folk remedy for the disease in the oral cavity and on the lip is prepared as follows: dissolve a spoonful of fresh honey in a water bath, add a similar amount of olive oil, raw chicken egg protein and 0.5% novocaine ampoule. Stir until smooth with mass and use about two times a day.

11. In a milk of magnesia moisten a cotton swab. They pass through the sites of the disease several times a day.

12. Soaked in water with a bar of laundry soap (be sure to take a dark one!), Treat ulcers on the legs.

13. Onion until golden brown fried onions, chopped as small as possible. Oil is poured into a glass container. It is useful for the treatment of trophic wounds.

14. A little juice is extracted from the fresh greenery of celandine. Lubricate the affected areas of the skin several times a day before recovery.
The development of an allergic reaction on the skin is likely.

15. Half a kilogram of young needles of needles are passed through a meat grinder. Mix with the same amount of honey or sugar. After a couple of weeks, the raw materials are squeezed out, and the liquid is used to treat wounds on the lower extremities.

16. Six bushes of nightshade are freed from the roots, washed and passed through a meat grinder. The juice obtained after the manipulations is used to treat leg ulcers. The recipe is considered especially effective in the removal of acute pain and burning.

18. To one hundred milliliters of hot water, pour alum powder on the tip of the knife. Apply to affected areas of the skin with a cotton pad.

19. A spoon of honeyfish in a glass of boiling water hover for about half an hour. They treat sore feet twice a day, moistening a cotton pad in the infusion.

20. A pair of cloves of young garlic is crushed and added to three glasses of apple cider vinegar. After a couple of weeks, the drug is considered suitable for the treatment of trophic ulcers. Soaked in napkins in it, the necessary area is treated as often as possible. 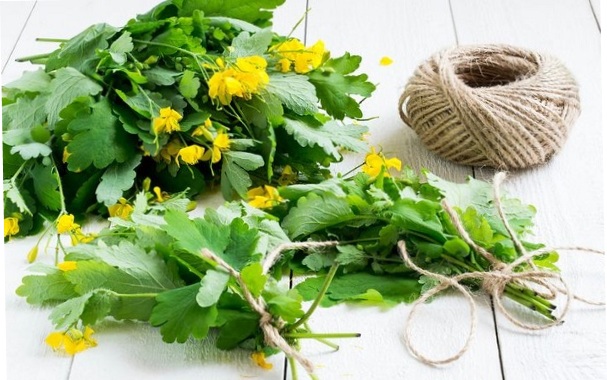