The disease can be congenital or acquired. Among the forms of acquired glaucoma, primary (open-angle, closed-angle, mixed) and secondary (inflammatory, traumatic, phacogenic, postoperative, vascular) are distinguished. Universal symptoms are blurred vision, a feeling of heaviness in the eyes, sharp pain and pains. At risk are people who have reached the age of forty and have acute inflammation of the eye (cataract, keratitis).

Applying compresses for ever is an important part of a folk therapeutic program. Thus, you can get rid of eye fatigue, swelling and pain. Unless otherwise indicated, treatment is continued until relief.
Compresses for glaucoma.

Take a pair of medium-sized potatoes. Grind and mix with a tablespoon of apple cider vinegar. Fifteen minutes later, the mixture is wrapped in a gauze and applied to the eyes for half an hour. Repeat three times a day. A prescription may help relieve inflammation, but will not cure glaucoma.

Buy at the pharmacy tea bags with calendula. A few pieces are brewed for five minutes, squeezed and applied to the eyes, waiting 10 minutes.

A glass of water is poured into a couple of sheets of aloe. Boil on low heat for no more than five minutes, after which it is filtered. The resulting solution is used for washing the eyes and compresses, wetting the gauze. Treatment is continued for two weeks. Sessions are conducted up to five times in twenty-four hours. After a break of two weeks, they conduct another course.

In the same amount, honey and purified water are combined. In the resulting solution, gauze is moistened, applied to the eyes before a night’s rest for five to ten minutes. Treatment occurs within fourteen days. The composition is good for relieving fatigue, but he cannot cure glaucoma.

To a glass of boiling water add a teaspoon of chopped anise herb. Insist at least two hours. In the filtered moisture, cotton pads are wetted. Compresses are used up to four times a day, leaving in front of your eyes for seven to ten minutes.

Mix a teaspoon of anise seeds and caraway seeds. In a glass of boiling water, insist for two hours. In strained liquid, cotton pads are soaked, which are then applied to each eye for twenty-five minutes. Repeat sessions three times.

A teaspoon of lavender flowers is mixed with half a cup of chopped nettle. 230 ml of warm water are steamed (previously boiled) and wait nine hours. Before use, add half a dessert spoon of soda. The infusion is moistened with gauze dressings, which are then applied to the eyes for ten minutes twice a day.

In two small bags of flannelette tissue, a pair of small spoons of dill seed is poured. In an enameled container, boil two minutes after boiling. Cooled and slightly wrung out pouches are placed on the eyelids. Leave for 15 minutes. The procedure is performed for a month and a half, repeating before bedtime. Adherents of non-traditional practices consider such a therapeutic method effective in combating glaucoma without surgery.

Pre-crushed nettle raw materials (half a teaspoon) and lily of the valley petals (teaspoon) are mixed. Pour with warm liquid and leave for nine days out of the reach of sunlight. After filtering and introducing a pinch of soda. Cotton swabs are wetted in the resulting solution. Compresses are performed twice a day for 10 minutes.

As a liquid for compresses at home, it is recommended to use an infusion of blue cornflower (a handful of raw materials per glass of boiling water) and anise herbs (a couple of tablespoons per 230 ml of moisture). In the selected product, cotton pads are wetted. Apply to eyes for fifteen minutes twice a day.

Five grams of field liveliness for 1 hour, insist in 200 ml of boiling water. In a strained composition, cotton swabs are moistened, which for 15 minutes is applied to the eyelids. Repeat the procedure in the morning and evening. A recipe for the disease in the elderly is especially recommended.

One of the best tools in the treatment of eye diseases, including glaucoma and cataracts, is considered to be bukovica. Fresh leaves scalded with boiling water, knead and apply to the eyelids for two hours. At the same time, it is necessary to take the infusion of the plant. 30 g of raw materials are used per 500 ml of boiling water. Drink 50 ml per day. The course is forty days.

Juice is squeezed from fresh celandine. In equal shares mixed with water. The composition is wetted with gauze napkins. Applied to the eyes twice a day for cataracts and glaucoma. If celandine juice gets into the open eye, a mucous burn may occur.

Any alcohol tincture diluted 1: 2 with cool water becomes an aid for pains and pains in the eyes. Cotton swabs are moistened in it. Apply to eyes before going to bed for ten minutes. Alcohol tincture is not the best choice for compresses.

Squeeze juice from one pomegranate. They are mixed with a large spoon of honey and heated for ten minutes in a water bath. When it cools, use as a solution for lotions. The treatment procedure is repeated at least a month twice a day.

40 g of euphrasia are added to a liter of hot moisture. Three hours kept in a dry place under a towel. After that, gauze is moistened in the solution and applied to the eyelids for fifteen minutes. Do the manipulation two or three times a day. The same tool is used for instillation — 2 drops twice a day.

Kombucha treatment is carried out to normalize intraocular pressure. To two large spoons of the five-day infusion add 200 ml of hot water and 1 tbsp. l plantain. Insist half an hour. In a filtered solution, gauze napkins are moistened and applied to the eyelids for ten minutes. The duration of treatment is a week.

In a five-day infusion of sea rice, cotton pads are moistened and applied to the eyes for seven to ten minutes, repeated twice a day.

To three drops of fresh birch mushroom juice, add 2 large spoons of flowers of a pharmaceutical chamomile and 300 ml of boiling water. Insist 1 hour. As part of the wet gauze napkins. The procedure is continued for ten minutes. 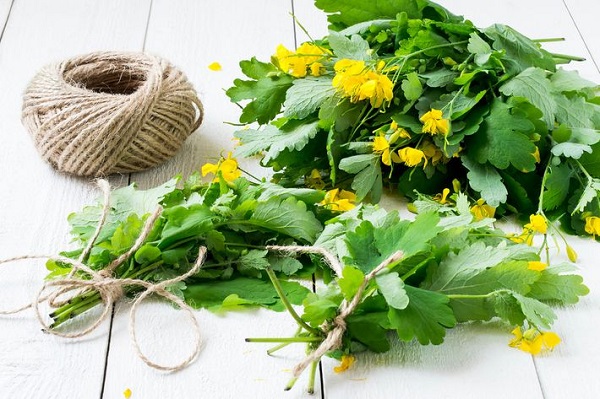