To get rid of eczema as soon as possible, phyto-infusions are recommended.

Most recipes are indicated for use within 3-4 weeks. A shorter course will have no effect.

1. Pour a few tablespoons of the roots and herbs of the celandine with a glass of very hot water, insist half an hour and strain. Ready infusion to lubricate the affected areas twice a day for a month.

2. Mix willow bark and burdock roots. Pour 60 grams of the mixture with boiling water (1 liter), insist for half an hour. The infusion is used every other day for washing the affected areas of the epidermis and washing the hair with seborrheic form. It is especially effective for severe itching.

3. Mix 20 g of calendula and chamomile pharmacy with 10 g of sage. Steam the mixture with boiling water in the amount of a liter, hold for an hour. An infusion of room temperature is used to treat affected skin. Sessions are repeated three times a day until the symptoms disappear.

4. Take one part of lavender flowers and rosemary leaves, three parts of thyme herb and chamomile flowers. A collection of 45 grams is poured into 500 ml of hot water. After half an hour, the folk remedy is filtered and used for lotions.

6. 20 g of horsetail field pour a cup of boiling water. After 60 minutes, strain and lubricate the eczema-affected areas 4 times a day.

8. Mix 45 grams of viburnum and currant leaves. Add to a liter of hot water, stand for 2 hours. Folk remedy for skin treatment.

9. Mix according to Art. spoon of chicory root, creeping thyme and chamomile, add a cup of boiling water. After half an hour, strain. At home, use to treat diseased areas, especially with weeping eczema.

10. Combine several tablespoons of dandelion roots with a similar amount of yarrow, burdock root. Pour a liter of hot water and wait half an hour. Filter and apply to treat the affected epidermis.

11. For 1 teaspoon of coltsfoot and nettle, connect a cup of boiling water with a cup. Insist a quarter of an hour, after treating the affected areas of the skin. The recipe is especially recommended for the treatment of seborrheic form.

12. A teaspoon of cilantro seeds is poured with a cup of boiling water, insisted for half an hour. The resulting infusion treats the diseased surface of the epidermis. 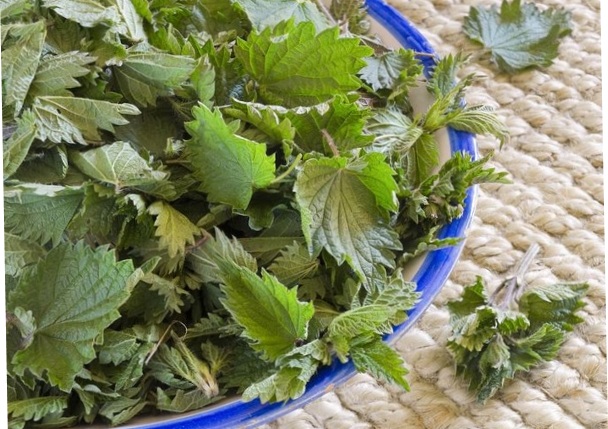