Diet Maggi. The secret of harmony «iron lady.» A diet for Maggie for several years remains on the list of the most popular slimming plans. On the market appeared tablets with this name. An enterprising American composed a children’s «Maggi Diet». Even absurd attempts to create the same soluble product were discussed.

In fact, a diet is named after one of the most famous women of the XX century — Margaret Thatcher. Her name «in the people» was famously reduced to unrecognizable four letters. But whether the Prime Minister of Great Britain lost weight on the famous Maggie diet nowadays? This is another question.

The legendary British Prime Minister Margaret Thatcher went down in history as a determined reformer and thoughtful strategist. Preparing to take the post of prime minister, she received an individual strict plan. But an effective diet. The main ingredients were the egg and grapefruit. It is not known how often the Baroness used the «Maggi diet». However, the plan kept her whole life in her archive.

Duration: 2 weeks;
Features: protein diet with an extremely low carbohydrate content;
Cost: average;
Result: minus 8-10 kg;
Recommended frequency: no more than 1 time per year; Additional effect: a diet with a long effect on the condition of competent output.
The menu of the Maggi diet does not fit: pregnant, nursing, with allergies to citrus and diseases of the gastrointestinal tract, with the use of pressure-lowering medications. Before starting a diet, consult your doctor!

The nutrition plan, which became known as the «Maggi diet», although it would be more correct, of course, to pronounce «Meiji». That is a diminutive of «Margaret». There is an intriguing story.

Even during the life of former British Prime Minister Margaret Thatcher (she died in 2013), historians began to disassemble her archive. He was left in the Palace of Westminster. And, among other documents, in the diary, dated 1979, a typewritten sheet with a certain menu was found.

Judging by the note, the menu was compiled for the «Iron Lady» individually by specialists from the Mayo Clinic in the USA. This diet and became overnight known as the «Maggi diet».

In addition to the nutrition plan itself, the leaflet contained a warning written in large letters. «Do not stay on this diet for more than two weeks.» And lower, already in the usual type: «You can drink whiskey in those days when meat is allowed. At other times — no alcohol.»

The Mayo Clinic from North America has gained worldwide fame. She developed a universal two-week «Mayo diet». The correct proportions of food were presented in the form of a pyramid. There it is prescribed to consume a lot of fiber fresh fruits and vegetables, a little less — slow carbohydrates and protein. Very few fats (mostly vegetable unsaturated) and a minimum of sweets.

The original Mayo diet involves replacing five harmful dietary habits. Add sugar. Have a bite of sweet and fat. Eat large portions. There are harmful foods in restaurants. Is in front of the TV.
Replacement with five useful. Have breakfast. There are at least four servings of vegetables and three servings of fruit a day. There are wholemeal products. There are healthy fats. Train 30 minutes daily.

However, during the transfer from mouth to mouth, the Mayo diet was transformed beyond recognition: today, under the guise of this diet plan, you can find a variety of dietary advice.

Until recently, it was believed that the grapefruit diet is due to the fact that these citrus contain substances that prevent the absorption of fat. More recent studies found that the effect of grapefruit for weight loss is responsible for flavonoid naringin. He controls the production of insulin, which means that he suppresses hunger.

Therefore, the Maggi diet can be recommended for very busy women, who, however, strive to improve the figure: a combination of protein and grapefruit allows you to level blood sugar and keep the appetite in check.

By the way, the same effect is used in terms of nutrition, known as the chemical diet of Osama Hamdi — the combination of protein, naringin, vegetable fiber and an extremely small amount of carbohydrates alters the metabolism at the chemical level, which is beneficial. For example, in diabetes, when violations of insulin production lead to obesity.

Menu for the week.

According to the forecast of the developers, the Meal Plan allows you to lose about 20 pounds (9 kg) for the entire period. The plan was written by clicking Mayo for Margaret Thatcher for seven days — after the expiration of the menu it should be repeated.

In addition to prescribed drinks, on a Maggi diet, without restrictions, you can drink non-carbonated plain water. In those cases where the amount of food is not specified accurately, the amount of the slimming portion is determined independently.

Breakfast (the same all 14 days). 2 eggs, 1 grapefruit, a cup of coffee or tea without additives

Dinner. 2 eggs, stewed spinach, coffee.
Dinner. Steak from lean lamb on a grill, salad from a celery, a cucumber and a tomato, tea without additives.

If you decide to stick to the Maggi diet for more than one week, but 2 or even 4 weeks — just repeat the menu from Monday to Sunday. 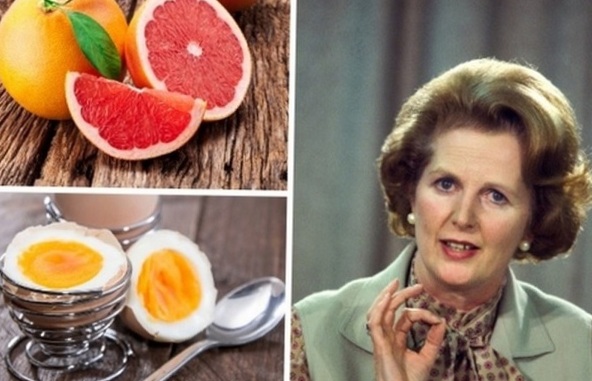